One problem at Haidian Book City

Today, I just came by Haidian Book City as usual at Haidian dist in Beijing. and I found the problem hung on the wall nearby. It is very interesting and I want to share it.

Here is one picture of it. 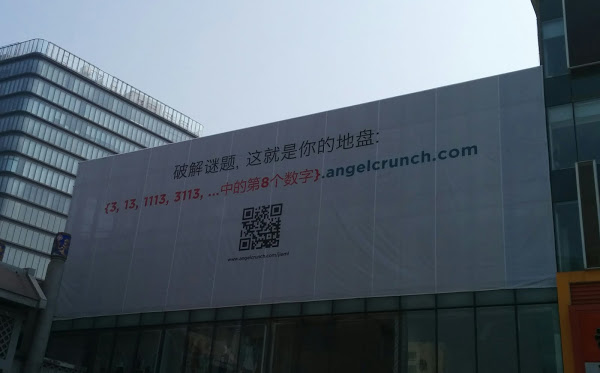 A translation of that:

Once you finish it, you will get the second as below:

Yes, as you may guess, it is one look-and-say sequence(sequence A006715 in OEIS.

In the sewuence, each member is genrated from the previous menber by "reading" off the digits in it, counting rhe number of digits in groups of the same digit. For example:

If we start with any digit d from 0 to 9 then d will remain indefinitely as the last digit of the sequence. For d different from 1, the sequence starts as follows:

As example in the following table.

For the second one, you need to know more about the sequence. John Conway studied this sequence and found that the 8th member and every member after it in the sequence is made up of one or more of 92 “basic” non-interacting subsequences. The 92 basic subsequence shows in the following table(from here.

Breaking Bad. That is the answer.

That is perfect from the begining to the end. Many thanks to the problem maker, and the screenwriters, also every excellent actors in Breaking Bad.